Player fact sheets will be available in the coming weeks with more specifics by team. Fees include all team apparel & jerseys and also include 50 raffle tickets for our annual raffle party that takes place in February of every year. Families may sell these for $10 apiece and keep the money collected as a way to reduce skater fees. 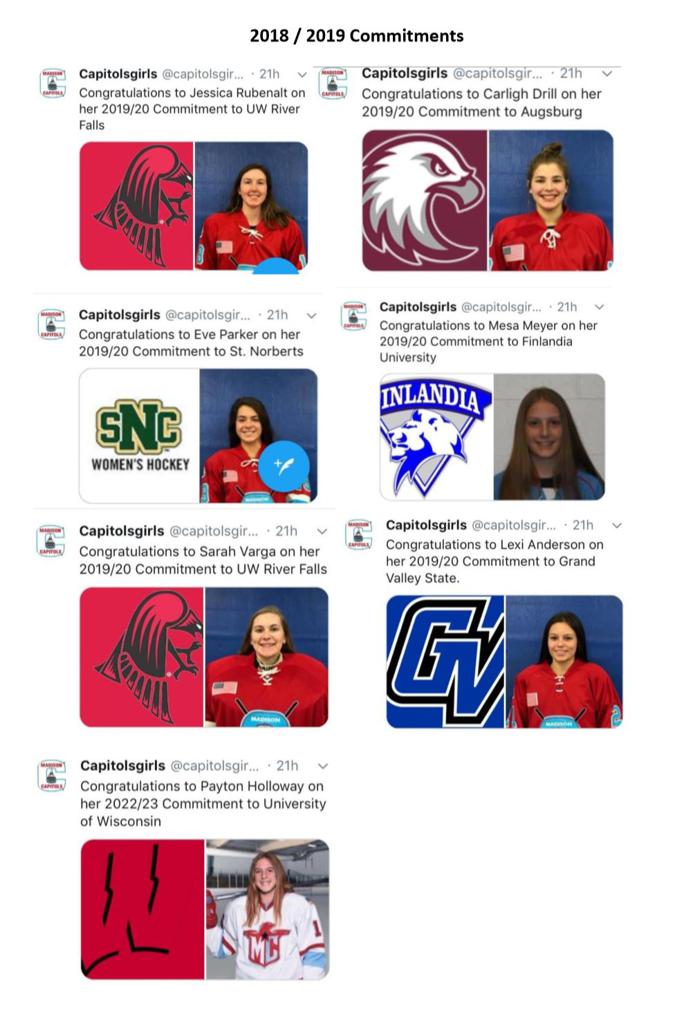 Congratulations to Paige Taborski on commiting to Northeastern University!

U14 Girls State Tournament Champs 3rd Year in a Row!

Congratulations to the U14 Cap Girls on winning the Tier 1 State Tournament for the 3rd consecutive year!

Congratulations to the U16 Girls team - Champions of the ChiTown Shuffle!

U19 Girls Back to Back Trip to Nationals

The Madison Capitols 19U Girls are heading back to Nationals for the second straight year.  The Capitols are having an outstanding season with an overall record of 30-23-14.  The Capitols played in the Midwest High School Elite League in Minnesota the entire fall season.  From there, they continued with a heavy strength of schedule going 4-4-3 against teams ranked in the top four at the National Tournament.  They went 1-1 vs Shattuck St Mary’s 19U, 1-1-1 vs Belle Tire 19U and 2-2-2 vs Chicago Mission 19U.  The season was capped off with winning the CAN AM Tournament in Madison, winning the Wisconsin Tier 1 AAA 19U State Championship and taking the Chicago Mission to a three game series at the USA Hockey Central District Championship in Mequon, Wisconsin.  Current head coach and former Capitols player Tony Scheid said, “We are really happy for the girls and excited to compete at the National Tournament.   We will take a lot of pride in representing the Capitols organization and Wisconsin Hockey.”

"14U Squad One of the Worldwide Participants in Global Girls Game"

U14 Girls team featured in a USA Hockey Article:

Besides growing global girls hockey, Capitols had another goal in mind: making nationals

They were a part of history, but the significance of the event was mostly lost on the group of Madison (Wisconsin) Capitols 14U girls that participated in the United States’ Continuous Game component of the International Ice Hockey Federation’s Global Girls Game on March 10.

The Capitols 14U girls were in the midst of a crucial playoff game, so once the puck dropped, they were more focused on winning than their part as one cog in a worldwide event that was raising visibility for girls and women’s hockey.

“I don’t think they think of it the way adults would; I think they were basically just focusing on what’s in front of their face,” admitted Capitols coach Dan Ruoho. “A lot of the time, at the age these girls are at, it’s kind of hard for them to look ahead to that. Obviously, it’s something different, they know it’s USA Hockey, they watch the Olympics, they understand that sort of thing, but some of them are so young, they’re eighth graders and freshmen in high school, they just see what’s in front of their face, that’s all they know at the moment. I’m sure once the game started, they didn’t think about it, to be quite honest with you.”

In the game, the Capitols ended up defeating the Milwaukee Junior Admirals 3-0 as part of the Wisconsin state tournament in Fond du Lac, Wisconsin. After another victory the next day against Team Wisconsin, Madison claimed the state championship and earned a spot in the Central District Tournament, which took place the following weekend in Mequon, Wisconsin, with the winner of that advancing to the Chipotle-USA Hockey Girls Tier I National Championships in Marlborough, Massachusetts, April 5-9.

“It was part of the state tournament, so the girls had some success and they came out on top,” Ruoho said of the March 10 contest. “It’s good. We don’t really focus too much on winning and losing, it’s more these girls understanding what they need to do in terms of how they have to play, doing the little things, and if you take care of all those things, the end result is going to be something that you’re more pleased with than if you don’t. That’s what we focused on most of the year.”

Led by key contributors such as Ivy Lyden, Payton Holloway, Ryan Ruoho, Teagen Phillips, Quinn Dunkle and goaltender Paige Taborski, the Capitols have enjoyed an outstanding season, whether they made it to the national tournament or not. They defeated the St. Louis Lady Blues 2-0 in their Central District opener on March 16, and faced the Chicago Young Americans on March 18 with a trip to Massachusetts on the line.

“I would never have thought at the beginning of the year that we’d be there, if we get there, but just to have the opportunity, I think, is something that they’ll probably remember,” Ruoho said. “You don’t always remember who scored what goal, how many goals you scored, wins or losses, but if you get an experience of going to a national tournament, or even an experience of getting past state to the Central Districts, it’s something these girls will remember.”

And while his players didn’t necessarily think participating in the IIHF Global Girls Game was that big of a deal (of course, teenagers hardly think anything is a big deal), Ruoho was glad the Capitols had the opportunity to get involved.

“I think it’s good for the girls’ game,” he said. “The girls’ game has come a long way in the last few years, as opposed to where it was years ago. There were hardly any women that played then and now it’s becoming more and more prevalent because of the opportunities that girls have these days to play beyond the high school age. So I think it’s an important piece of the puzzle. Every little piece helps keep girls playing hockey. Nothing against volleyball, soccer or other sports, those are perfectly fine, too, but the main focus is to keep girls playing, keep them involved and move the game forward, so the participation numbers go up.”

While a lot of girls at the 14U level might be tempted to move on to other sports for high school, Ruoho is confident his players will stay engaged in the game, because, at the Tier I level, many of them have aspirations to continue on to play in college.

“Some of them are freshmen in high school, some of them are eighth graders, it’s about 50-50, but the girls that I have, in my opinion, play a Tier I game, and that gives these girls an opportunity to play past high school,” Ruoho said. “High school is great, and these girls are looking to get something more out of hockey, and that’s what the Tier I level provides.”

Congratulations to the U14 Girls team - Central District Champs!

In the first game of the tournament they beat the St Louis Jr Blues 2-0.  The team was in a must win situation since CYA also beat the Blues with a score of 3-0.  CYA held the tiebreaker against the Caps.  The game was evenly matched and the Caps emerged victorious with a final score of 1-0.  The only goal of the game was scored unassisted by Payton Holloway in the 2nd period.  Goalie Paige Taborski had 21 saves in the shutout victory.

Congratulations to the team and coaches!  Good Luck at Nationals!

Our U19 Girls team won the 2018 Wisconsin Tier I State Championship, to make it a sweep for our Girls program! The U19s beat the Milwaukee Jr Admirals 4-2 on Friday, and Team Wisconsin 4-1 on Sunday to bring home the hardware once again! They advance to the Central District Championships at the Ozaukee Ice Arena, and will face the Chicago Mission, for the chance to head to the National Championships in April. Congratulations Girls!

Congratulations to the U16 Girls on their State Tournament win!

They beat Team Wisconsin 3-1 and the Milwaukee Jr. Admirals in a shootout win!  Good Luck at Central Districts!
Click here to view the tournament results.

Congratulations to the U14 Girls Team on their State Tournament Win!

They beat the Milwaukee Jr. Admirals 3-0 on Saturday and Team Wisconsin 3-2 on Sunday.  Good Luck at Central Districts!